A version of this blog post on a keyword “Course” in FemTechNet Distributed Open Collaborative Course (FTN DOCC) was presented at the Feminist Pedagogy Conference 2015: Transformations on April 17, 2015 at the CUNY Graduate Centre in New York City.

In 2012, I responded to a FemTechNet (FTN) open invitation for a Distributed Open Collaborative Course (DOCC). I am interested in experimenting with potentials of new media for feminist pedagogy and DOCC theory resonated with me. Eileen Trauth and Jennifer Wagner-Lawlor at Penn State joined me in co-teaching a DOCC “node” in Fall 2013 that we called G-STEAM (Gender and Science, Technology, Engineering, Art, and Mathematics). Each semester since Fall 2013, I have connected courses that I teach to DOCC and co-created pedagogical experiments: Performing Dialogue, Exquisite Engendering, and Feminist Mapping. My contribution to the FTN Roadshow Blog Series is about these DOCC pedagogical experiments situated in the keyword, COURSE.

The Distributed Open Collaborative Course (DOCC) is a feminist approach for 21st century learning and teaching in the age of social media connectivity. The DOCC is open access, multimodal publishing, collaborative research and publication, and transdisciplinary pedagogy. In this sense “course” is an ongoing DOCC discourse, a digital multi-continuum of open-ended courses. The DOCC has intervened in education discourse on the authority of insular knowledge and one-way modes of communication in massive online courses toward multivocal and multimodal communication, learning, and knowledge production. Jasmine Rault begins the FTN Roadshow Blog Series referring to DOCC as “experiments in pedagogical technologies” and “a kind of insurgent collectivity and distributive technology of care.” Karl Surkan in the Roadshow series emphasizes, “as we wrote in the FemTechNet Manifesto, ‘collaboration is a feminist technology’ – so the two are mutually constitutive.” The DOCC approach fosters rigorous dialogue to imagine, and then create, an equitable and socially just education. Maria-Belén Ordóñez in the Roadshow series states that “the point of the DOCC [is] to build a network of feminists who are committed to inclusive, democratic learning.” For me, the labor of teaching was not necessarily lightened but purpose, learning, and pleasure deepened in collaborating with Maria-Belén and others in the DOCC.

Lisa Brundage and Emily Sherwood in the FTN Roadshow series provide a feminist pedagogy example of DOCC theory in re-visioning their pedagogical technologies of linear digital architecture to a collage mural space for planning, dialogue, resources, and engaging the world. In the G-STEAM course in Fall 2013, while each week there was a different theme, many of which were shared themes with other DOCCs, there was one theme which was overarching: CREATIVITY. Not only creativity in what and how we read but also in the pedagogy. From the beginning of the COURSE, students discussed what a feminist approach to creativity might be, and about how feminist digital spaces could themselves be spaces of creativity. 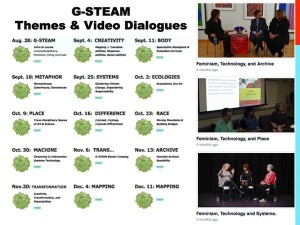 alex cruse, in the FTN Roadside series, identifies DOCC goals to be “inclusive, participatory, decentralized, and nonhierarchical structures and processes.” T.L. Cowan in the Roadshow series writes on how “DOCC is an exemplar of cabaret pedagogy. … Cabaret is about people working together to make something that they couldn’t make alone, and its economic structure is more often driven by mutual support than by big cash rewards.” This is the (dis)COURSE of DOCC.

Maria-Belén Ordóñez in the Roadshow series discusses our cross-class project that had three parts from introductions of embodied theorizing of self through reading Erin Manning’s (2007) Politics of Touch and Allison Weir’s (2008) ideas of global solidarity and transformation. In my graduate course, Including Difference, the introduction of self to students in Dr. Ordóñez’s DOCC was a “Mapping Difference” assignment linked here. Visually mapping difference can be seen at all the students’ blogs linked to the assignment. For example, Becca Brittain Taudien’s identity map, linked here, and Eunjung Choi’s mapping of self, linked here, reveal their revelations regarding privilege, positionality, and difference in the process of mapping a relational self. 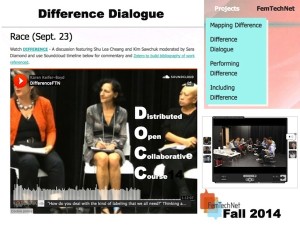 After introductions, students embarked on Difference Dialogue, an assignment described here. Both classes watched FemTechNet’s “Difference” Video Dialogue, a discussion featuring Shu Lea Cheang and Kim Sawchuk moderated by Sara Diamond.[i] Students in three courses (one undergraduate course and two graduate courses) in Fall 2014 used SoundCloud’s timeline for commentary; and students in my graduate-level course also used Zotero to build a bibliography of work referenced in FemTechNet’s “Difference” Video Dialogue. You are invited to join the FemTechNet collective bibliography group. Once in the FemTechNet group, you will find several folders including the “Difference” folder with full references and links to all the texts mentioned in the FTN Difference Video Dialogue.

The third part of the cross-class project we called “Performing Dialogue.” Students in my Including Difference graduate course wrote an interpretive script from their dialogue with students in Dr. Ordoñez’s graduate course and from in-class dialogue as well as course readings. Penn State students performed and video-recorded their scripted dialogue considering audience, that is, who they would like to communicate to in their performing dialogue. One student, Carla Fernandez, a Penn State doctoral student in psychology from Paraguay, joined the weekly three-hour class sessions from Italy where she had traveled during the course for a conference. During this time, the Performing Dialogues were due. Carla asked a stranger to her, a young woman from China, in a public plaza in Florence, Italy, to perform the dialogue with her. Students in the course at Penn State watched the video-recording in Pennsylvania, followed by discussion with Carla in Italy via video-conferencing technology. Carla’s script and performance is about difference beyond the physical into the psychological, which is linked here. Carla’s teaching in her Performing Dialogues spilled outside academia and is a good example of cabaret pedagogy.

DOCC feminist mapping entangles responsibility, identity, body, memory, lived experience, and knowledge.[ii] To introduce the Feminist Mapping project, I showed several examples of mapping such as Maya Lin’s What is Missing?, a science-based artwork as digital memorial, mapping the disappearance of species habitat degradation and loss.

Here, I provide links and brief descriptions of two feminist mapping projects from the Fall 2013 G-STEAM (Gender and Science, Technology, Engineering, Art, and Mathematics) course. Hyunji Kwon, a second year art education and women’s, gender, and sexuality studies doctoral student in Fall 2013, developed a visual feminist historiography of Kang Duk-kyung’s life, which includes Kang’s symbolic drawings about the atrocities of her experiences as a “Comfort Woman” sex slave. The map is linked here.

Veronica Hicks, a first semester art education and women’s, gender, and sexuality studies doctoral student in Fall 2013, used Inklewriter to create an interactive book, STEMINISTS IN THE MAKING. Veronica selected the theme “TRANSFORMATION: Creativity, Transformation, and Potentialities” for her turn in facilitating talking circles in the Including Difference course. She extended the FTN SYSTEMS 1.NARRATIVE Video Dialogue with Brenda Laurel and Janet Murray moderated by Anne Balsamo in creating a “Choose Your Own Adventure” interactive book, which provided a game-like teaching approach to learn of women in STEM. 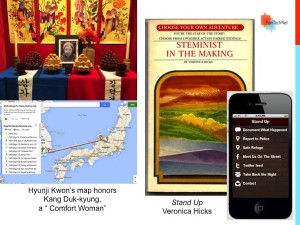 In 2014, T.L. Cowan, in collaboration with others, launched a DOCC feminist map, The Situated Knowledges Mapping Project, to make visible politics of location and identity. More on the mapping process is linked here and on the map as a “place to work out theoretical problems and positions relative to feminist thought in a very direct and personal way for the students reading and writing into it” is discussed in Karl Surkan’s post on Collaborative in the Roadshow series. The Situated Knowledges Map pin posts marking places of harassment remind me of Tatyana Fazlalizadeh’s Stop Telling Women to Smile art series, which addresses gender based street harassment by placing in public spaces where harassment occurred her drawn portraits of women with captions that speak directly to offenders.

The FTN DOCC “Exquisite Engendering Video ReMIX, MIXed Reality Art” project is a riff on the Dadaist’s Exquisite Corpse art process. Our project is “Exquisite Engendering,” inspired by Erin Manning’s (2007) book, Politics of Touch: Sense, Movement, Sovereignty. She describes engendering from Latin roots generrare, to generate. “To engender is to undertake a reworking of form. To engender is to potentialize matter. Engendering involves potentiality at its most fertile: it calls forth the link between the incorporeal and the material, between the virtual and the actual” (p. 90). In the second iteration of Exquisite Engendering in Spring 2015, we focused on racism. Penn State and University of North Carolina, Wilmington undergraduate students preparing to be teachers watched Comfortable: 50 People 1 Question (4:13 min.) and The Skin We’re In (6:13 min., 2013), a talk by Nina Jablonski, distinguished professor of anthropology at the Pennsylvania State University, who debunks supposedly connected biological, behaviorial, social, and cultural characteristics of people. Students used SoundCloud timeline for commentary (text and audio commentary is linked here). The videos and commentary focused the theme of race in the remixes students created, in this case, for viewing by fourth graders, an age when stereotypes, prejudice, and discrimination can be entrenched, internalized, or disrupted. Strategies included:

For example, one student created a stop-action animation inspired from Jane Elliott’s Blue Eyes/Brown Eyes experiment in 1968, which continues to be a powerful controversial exercise to raise awareness about discrimination and privilege based on body differences. A group of 18 predominantly White fourth graders responses included that it is unfair that one pencil got the paper and sharpener, the other did not. Several students visually expressed sadness, sympathy, and/or empathy for the unfairness of privilege and depravity. The Exquisite Engendering Remix exhibition of the video art with surrounding individual and small group responses on VoiceThread is linked here.

I conclude with an invitation to move educational disCOURSE toward including difference in open networks of collective responsibility for well-being of all people. The course of FemTechNet’s DOCC flows from participants’ labor to end violence of dogmatic teaching and instead to practice eco-social justice education.