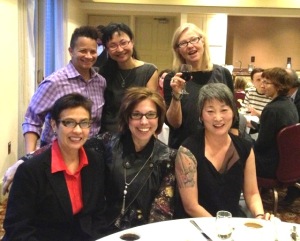 Dialogue and interchange are key aspects of FemTechNet. During 2012-2013, we produced at least four dialogues, on Labor, Race, Sexualities, and Machine. The Dialogues are on the FemTechNet Vimeo channel as well as hosted on a site that enables captions with transcripts, here. Other topics include: Archive, Wikistorming, Bodies, Difference, Place, Systems, Transformations, and Games.

Each Video Dialogue features two prominent feminist scholars/artists/practitioners in conversation about a topic.  The topics for the Video Dialogues were “community-sourced” based on discussions among FemTechNet participants in July-Sept 2012.

Topics discussed in each Video Dialogue are intentionally broad and should be understood as a starting point for further discussion among DOCC participants.

Ready for filming the video dialogue on Bodies at the University of Illinois, Urbana-Champaign. L to R: Dorothy Roberts, Karen Flynn, and Sharon Irish