Enjoying a much-deserved drink with highly-Twitterate Jessie Daniels (@JessieNYC) after a few days of talk, workshops, and video dialogues in Ann Arbor, Michigan about Feminist Digital Pedagogies, I was discussing with her the changing culture of blogging, and other social media forms in relation to our own ever-changing digital metronomes. Which is a fancy way to say here what I said there: “I always used to blog about conferences, but now it feels like it takes too long to blog; the work is too hard. What’s the deal with this quickening?”

Now, I won’t go into the long and short of that conversation held with several other bigwigs of the digerati—Andre Brock, Carrie Rentschler, Laura Wexler–but only begin there (and not at the panel) for two reasons (which were, in fact, big ideas covered at the panel):

Crank (or should I say crunk) it back a day, and move the (my) body to Rutgers, and similar conversations were happening, under the same title, only in a different room, and to a similar but unique crowd (online and off: see Adeline Koh’s Storify version.) These were the tweets for #teachdigitalfem, a digital pedagogy conference at Rutgers in January 2014. The conference schedule can be found here: https://womens-studies.rutgers.edu/events/725-1-23-1-24-conference-feminist-digital-pedagogies 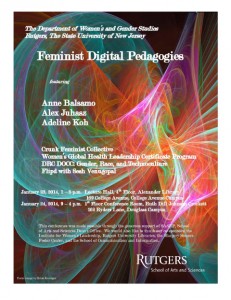 Now, you might ask, why two conferences, two cities, three days? What is this telling us about this metronome and its unique piano-home? A conference, as you all know, is a kind of medium speed but fully-placed venture: long talks, all day in one room, some need for a coffee and pee break, but the sustaining, necessary gratification of f2f: we must be present to each other … sometimes.

As was true just a year or two ago, when the fembot collective and the femtechnet one found ourselves forming in distinct places, for varied (feminist, digital) ends, but at the same time, and then worked together to divvy up some of that HUGE map-of-affective-labor, this current synchronicity marks a pulse we can all be nourished and energized by across our differences. Rutgers and Michigan held these sister conferences because they want to up their digital games. That’s because over just the past few years a large enough number of us have organized in a lot of places, temporalities, and forms, so as to create visibility, community, and output, so as to make it crystal clear what was always true: that there’s a new and old game in many time-frames and in a world of places; miss it to your own loss.