Critical Paths for Theorizing the Digital in Higher Ed

I’ve just returned from a day-long Symposium, Theorising Technology in Digital Higher Education. Sponsored by the Society for Research into Higher Education in the UK, and organized by faculty from the Education Schools of the Universities of Stirling and Edinburgh, the event demonstrated several critical paths for those who embrace and also are committed to understanding and improving digitally-enhanced education.

Rather than a day of boosterism, we enjoyed a well-orchestrated series of long talks where the two other featured speakers exhibited how FemTechNet‘s critiques of technology linked with our feminist theories of pedagogy can sit productively with other schools, methods, and projects of critical Internet analysis and teaching. It was great to discuss the Distributed Open Collaborative Course (DOCC) in a room full of Education scholars: a conversation we should be having as frequently as possible.

After my presentation on the DOCC, Ben Williamson from Stirling and Norm Friesen, currently at University of British Columbia, Vancouver, applied respectively, a sociological and a media archeology lens to the current and past states of technologized education. Williamson presented recent interpretations and theories of the Algorithmic Digital University, enumerating the many possible fabrications that are constituitive to a Big Data Epistemology where “partial oligarchic vantage points” of data science, venture capital, and social-media companies become structuring logics for visions of contemporary social science research and the quantified selves who produce it. 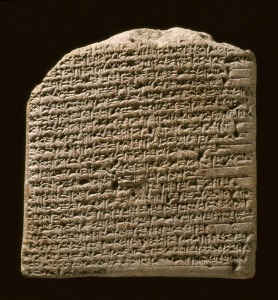 A Letter from Tushratta of Mitanni, Ancient Texts Relating to the Bible

All three critiques of educational technologies played to a receptive and committed crowd of European scholars of education who, as is true for FemTechNet, seek to embrace, develop and challenge simple techno-deterministic understanding of the digital, and instead are working towards, as we pronounce in FemTechNet’s manifesto, a more “accessible, open, accountable, transformative and transforming university of our dreams.”

Check out the MSc in Digital Education at the University of Edinburgh’s related “Manifesto for Teaching Online” here!