To prepare for this class, the students went through an independent orientation using Virtual Ability Island, an island on SL that is designed by people with disabilities for people with disabilities. There they familiarized themselves with SL, getting acquainted with how to navigate and interact with the space. They were asked to answer questions such as, A virtual exhibit has many ways of communicating its message. For example, it could put up big signs to tell you why you are there. That’s a pretty obvious way to do it, but there are also subtle ways of having an effect on the viewer. It could be something that you see out of the corner of your eye, it could be something that moves, it could even be something that you trip over. Has the creator included anything like this in the exhibit? What effect did it have on you? Following this orientation, Pitzer students began preparing for Professor Collingwood’s class by doing her assigned reading. 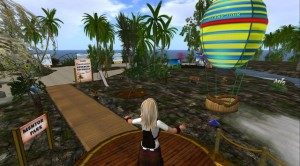 This week’s topic was Reproductive Justice. We read articles that included “Do Pregnant Women Have the Right to Refuse Surgery?” and “The Only Good Abortion Is My Abortion”. We also took a quiz offered by the Guttmacher Institute that tested our knowledge of sexual and reproductive health. When all of this work was done, the plan was that we would be able to participate in OSU’s digital class, along with the rest of Professor Collingwood’s students.

Sure enough, there were Pitzer students and OSU students, all sitting around a presenter screen with Professor Collingwood’s avatar front and center. On this research and teaching center within SL, known as Minerva Island, we were given the lesson plan for the class and eagerly awaited the field trip that we had been told we would be going on (to a women’s clinic in SL).

Professor Collingwood led a quick voice check, and eventually, most students got their microphones in order and were able to participate both visually and aurally. She began with a short lecture about the confrontation of women’s biology with traditional social structures. Then one of her students gave a fascinating presentation on cesarean births. This jumpstarted the Pitzer students’ involvement, and soon students from both classes were interacting with each other about the subject matter.

An hour flew by, and before we realized it, we were teleporting to the Slenz Midwifery Project, a birthing center that is inspired by the real life natural birth centers that are currently being built by the New Zealand government. Our students were in awe of the clinic and how much they learned about Reproductive Justice through this digital medium. I have already received enthusiastic responses from Pitzer students about their time within SL.           FemTechNet seeks to bring students together, in dialogue, both physically and digitally, and this specific joining of two very different classroom setups speaks a great deal to the work that FemTechNet is doing to make its mission a reality, virtual and otherwise.